The blog has been dormant for the last week or so because it turns out Guildenstern (and honestly the entirety of Rosencrantz & Guildenstern Are Dead) is mentally exhausting. Who knew? To the point, in fact, where I was unable to chat with friends who came afterwards; the tip-of-the-tongue-the-teeth-the-lips, like a ballet dancer’s feet when unchoreographed, were accustomed to such Stoppard-enforced precision by the end of the night they couldn’t really do much articulating on their own. This seems to have continued over into having anything intelligent to say about the play – or anything that the play doesn’t say just fine on its own.

The pleasure came when the audience showed up – not that rehearsals weren’t fun, but the amount of legitimately hold-for-laughs comedy they mined out of it was even more, I think, than we anticipated. Or I may just have been so mired in learning the whole show over a period of months (memorization was a multi-front war, as it increasingly is with age/repertory, of highlighting, listening to myself recorded, writing it all out in unintelligible longhand, doing the dishes, etc., with a page or two of the script at hand to go over and over, pacing, mumbling, and of course actual rehearsals) that I couldn’t even be bothered to concern myself with how much the audience might respond to it.

It was nice to do for a modern audience we could still guarantee had some familiarity with Hamlet, many of them having seen Kentucky Shakespeare’s 2014 production. For instance: I consistently got a fair (cheap?) laugh with a slight pause – relative to the rest of the pauses in this script – after the second word of the line, “Words, words, they’re all we have to go on” which I thought would be at best a way-homer. There were others.

Unfortunately, I can’t seem to escape. Once I was solidly off book, I allowed myself time for some pleasure reading again and picked from my room-sized To Get Around To stack Kazuo Ishiguro’s recent The Buried Giant, a novel about, among other things, a mist of vague amnesia and attendant anxiety creeping across post-Arthurian England. It’s a lovely book but it’s rather cruelly played into one of the trickiest parts of R&G: the difficulty of remembering a ludicrous amount of very delicate, articulate, repetitive, nay, loop-prone lines, many of which are precisely about the characters’ lack of memory. Not a nice thing to do to oneself.

Then I started catching up on the New Yorkers I’ve left sitting about for a couple of months and opened the December 19/26 issue to find this Alan Burdick piece on the psychology of time, which would have been exactly the sort of thing I picked up a New Yorker to read were it not for having spent the last while trying to get the rhythm right on a line like:

G: Yes, one must think of the future…

G: To have one. One is, after all, having it all the time…now…and now…and now…

R: It could go on for ever. Well, not for ever, I suppose.

Those “nows” and more importantly their accompanying ellipses are a bear if you want them to sound non-contrived and therefore funny. (The effect was aided by the staging, which had Rosencrantz trying to sit down but startling a bit as each was said, so timing the line was a matter of keeping another actor’s left hip in my visual periphery.) So to pick up an article that quotes William James on the passage of the instant – “We tell it off in pulses…We say ‘now! now! now!’ or we count ‘more! more! more!’ as we feel it bud.” – is to relive something one is trying to clear one’s mind of to make room for the next show.

(I could have given James a hand here, honestly. The concept of time exists so punchlines land properly. Any other usage is tangential. Steve Martin once joked in Q&A form (G: “Question and answer. Old ways are the best ways”) that the perfect amount to pause for a punchline was “a second and a half”…which was how long he waited to answer that very question with that very answer. Had James, St. Augustine, and Burdick watched that special sixty or seventy times as a youth as I did – Comedy Is Not Pretty – they’d have had fewer such nagging questions. Though the show had more to say on Socrates than Augustine, I guess.) 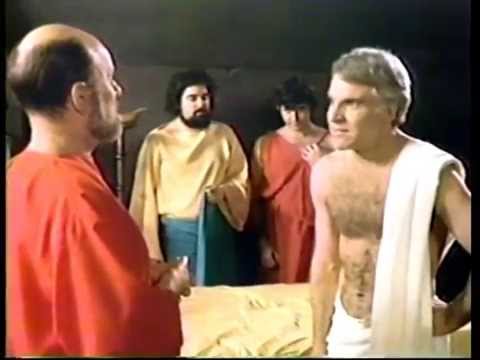 This isn’t uncommon, this seeming attack from the outside by the very topic you have no particular intention of being obsessed with or consumed by but which seems to enjoy your company, which seems drawn to you like the disproportionate amounts of dust that surround electronic equipment at home while one is at rehearsal all the damn time. Or not uncommon to me, at least.

But it does have a way of making one feel like Michael Corleone, as bememed above, is all.

3 thoughts on “I am most dreadfully attended – HAMLET, II ii”