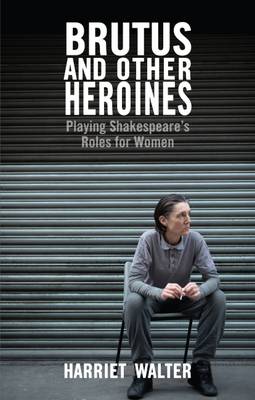 Well worth your time is Harriet Walter’s Brutus and Other Heroines: Playing Shakespeare’s Roles for Women. Walter (who I’m pleased to say is among the ranks of those with their own “fuckyeah” Tumblr tribute) is someone about whom – and this is rare for me – I remember the moment I thought, “Oh, that’s someone doing their work well.” I was a college actor working my first technically professional, technically acting gig at what was technically a theatre performing what the dictionary would define as a role in what we’ll generously call a play. I went to see Sense and Sensibility one night with my landlady (long story) and remember clearly two things (well, three, if you count my general Emma Thompson/Kate Winslet Thing; I am a human): the first was that Elinor Dashwood was the first non-male role as an adult with pretenses toward being an actor that made me think immediately, “oh, I get that person; I’d play that part at the drop of a hat”; the second was that the woman who played her vicious sister-in-law Fanny made this gesture in that scene in the stable, her arm outreached to get Edward to go with her. Right. This. Second. Without saying anything or waggling the fingers at the end of that arm. No big deal in the grand scheme, just a little acting moment, but something I remember thinking of later from a craftsperson’s viewpoint. That she’s only Doctor Tending to Chewbacca in Episode VII to many people is…sad but unsurprising. (Though I’m glad the Lee family was represented again – she’s Christopher’s niece. And the Doctor’s name is Kalonia. I am a human.)

Anyway, while the angle getting this book into conversations is Walter’s recent foray into playing the leads in a trilogy of Shakespeare’s plays set in a women’s prison (and that is covered and covered well in the book’s final chapters as well as an epilogue in the form of a letter to Shakespeare you should most definitely read), even without that up-to-the-minute discussion of stage trend, she just brings such clear and useful perspective to a book that is neither a collection of anecdotes about her creative partners nor a scholarly feminist rethinking of the plays but simply a professional’s recounting of how she deals with character, how that has changed over the span of a career, and how it is still changing forty-some years into that career, which she’s not particularly keen on slowing down.

Full disclosure: I am not a woman, nor was my performing type ever very youthful – I’m in my early forties and have the luxury of only just beginning to age into the roles I’m right for, and while I share good old Keats’s fears that I may cease to be, etc., for women on stage, as Walter notes in her “letter”, particularly in Shakespeare and sadly almost as much in the centuries of plays that have emerged from his impressive shadow and found it difficult not to use his as a template, the challenge is almost always the opposite – an age is reached and the parts disappear, doubly so if a significant piece of one’s career has been spent inhabiting the classics. To Will Himself she writes kindly:

I do appreciate that you were a jobbing playwright with a living to earn and that, in your day, women weren’t allowed on the stage, and I also understand that women (pace your Queen) were not allowed at the centre of public life, so why would female characters feature at the centre of the drama that holds the mirror up to that public life?…Nowadays we are challenging all preconceptions about gender, both in terms of personal identification and public roles, so I hope you don’t mind but I have been playing men recently. I am only following your own example. It seems as legitimate for women to play men as it was for boys to play women.

(I should add here that this is a crusade I’m actively a part of, if only as an actor/sometime director who knows all too well the dispiriting ratio of character gender to qualified, available performer and would love to see audiences willing to embrace all sorts of stage magic and transformation given a chance to embrace another kind.)

But as noted before, while this is the book’s hook, you’ll come for the 21st Century Rethinkings and stay for the wise professional’s thoughts on craft. I have no idea whether this sort of thing is of any interest to people outside the profession, but Brutus is primarily a series of famous roles and how one actor took on each. I should admit here that one of the reasons I’m so pleased to read her thoughts on how all this nonsense we get up to on stage and in rehearsal works is her tendency to reaffirm something I already believe but like to hear stated clearly, so I was prone to be happy to read:

(There, actors of Shakespeare. Just do that. If you must get a tattoo, get that wrapped around your bicep a couple of times. I’m sorry, Dame Harriet. I’ve interrupted. Go on.)

I let the rhythm of her words work on me…I must understand her choices, temporarily inhabit the mind that makes them, say her words and perform her actions, and hope thereby to make her ‘live’.

Walter has a keen sense of where the decision points are in a role/relationship/play, but has an equally keen sense of where mileage may vary. That said, she slaps down a few decisions that don’t hold up under textual scrutiny, the sort that seem like shanties built atop the character instead of gold mined from inside. In plays full of irony and deception, she’s wise about when characters need to be taken at their word. On whether Viola is a schemer in Twelfth Night:

Theories can sound attractive, but when you come to play the part they often just don’t stand up from the inside….My answer to all this is that Viola soliloquises, and there is no example in the canon of a character lying to the audience in a soliloquy. Viola’s soliloquies are full of confusion and ‘what the hell is going on?’ If she harboured any…schemes, I think the audience would be let in on them.

Similarly, she reminds a student (and herself) that emotion (in this case, while playing Cleopatra in Act V) is a byproduct, not a goal:

[‘I dream’d there was an Emperor Antony…’] is one of the greatest speeches I have ever had the luxury of speaking, but there lies the rub. One must not luxuriate in it. The student was delivering the speech so engulfed in her own luxurious misery that the words were indecipherable…I too had loved the luxury of the speech, but I also knew that more important than my feelings were the words and the images that I/Cleopatra had to sell to the audience and of course, to Dolabella, who will take the message back to Caesar.

It’s a quick read, but one I sense I’ll go back and pull thoughts from later, and one that will certainly reward your time. I heartily recommend.