As I’ve noted elsewhere, dramaturgical concerns arrive like the Spanish Inquisition. Today my wife and I were watching The Year Without a Santa Claus, starring Oscar & Tony winner Shirley Booth (in her final role), Emmy winner/Oscar nominee Mickey Rooney, and the perennially underrated Dick Shawn, among others. You know the one. With the Miser brothers and all.

It’s terrible in its 1974 stop-motion way and its wonderful in its comfort food holiday constancy. And possibly prescient in its climate change metaphors, but I really do not want to think about that right now.

Before I get too far into holiday TV nostalgia, I should note that there’s a legitimate Shakespeare matter here. If oversimplification is permitted here (it is), most of his plays were written in some combination of verse and prose, of speech that’s in a strict (well…on paper) rhythm and speech that ain’t.

There are varying feelings about what, for an actor, the purpose of this difference is. (Not just for the actor, but we are the ones who have to make the difference heard.) Some say it separates the high-born from the low, some the ceremonial/formal from the humdrum everyday, some the sane and/or sharp from the mad and/or stupid. Also letters, as noted in the title of this post – that’s my fellow (fellow!) Malvolio reading from the ersatz Olivia letter.

And all of these are true some of the time, though all of those are demonstrably false some of the time as well. Iago is neither crazy nor a fool, Olivia is plenty genteel of birth. There’s something to each of these takes on when Shakespeare might choose prose, but none is consistently true in a helpful way.

My favorite interpretation is the one I found in Giles Block’s work. I cannot recommend his Speaking the Speech highly enough; I’ve plowed through a huge stack of published works that lay out as many and as varied methods of explaining How To Talk The Shakespeare because I feel like my job as text coach is not to espouse a theory or method so much as find the theory or method that speaks most effectively to each actor I’m asked to assist. His book from a couple of years back is the one I’ve found speaks most usefully and with no nonsense to the widest swath of people.

Block’s take (returning to oversimplification – he has chapters on this and I’m not just going to paraphrase them in toto) is more or less that verse is the sound of sincerity – closest to the heartbeat – and prose the sound of… not insincerity (or not exclusively), but of what happens when a character is out of touch with the heartbeat. So the profoundly stupid, the mentally unstable, people lying to others, people lying to themselves, people carefully crafting their words instead of letting them spill out (as verse almost always does) including those actively trying to entertain an audience in any sense of that word, people dealing with things that are a bit removed from their inmost hearts. Also letters. 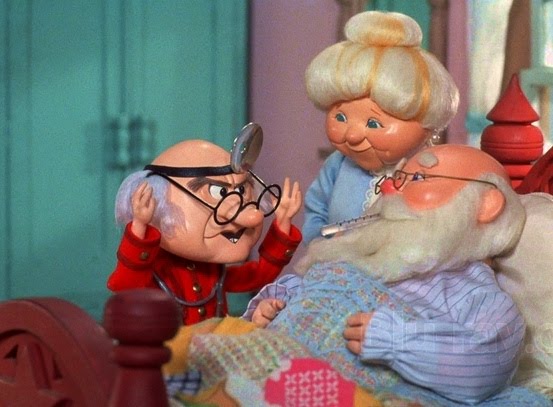 The Year Without a Santa Claus was based on a children’s book by Phyllis McGinley, some of which text is used in the narration. This is going somewhere, I swear it.

(Which means I’ll refrain here from seasonally going on about how it’s bothered me since I was far too young to be bothered by such things, from a poetic viewpoint, that the “arsenic sauce” line and the “mangled up in tangled up knots” lines in “You’re a Mean One, Mr. Grinch” from a different holiday special entirely were obviously transposed in post at some point – you can tell because they’d rhyme with their preceding lines if they were only swapped – listen for it – but the “knots” line is longer, so there was probably something in the animation sequence that made it necessary and while I’d seldom question the wisdom of personal artistic hero Chuck Jones, seldom is not never.)

At one point early in Year Without a Santa Claus the book-based rhythmic/rhymed narration stops and we move, as I noted aloud to my wife as it happened this afternoon, into prose. We then discussed why the impending entrance of the surly Elf Doctor would trigger such a change. Class? Clearly the Clauses are the royalty in any North Pole scenario. Sudden dealings with the quotidian matter of having a flu checkup? I don’t know – a similar scene between Helena and the King in All’s Well shoots a hole in that, though he doesn’t have the flu. Beatrice has a prose cold for part of Much Ado, but she never sees a doctor about it, or not that we hear about. I’m sure Theobald and Pope have reams of opinions on that. The Elf Doctor certainly fits into what Block would call the “prose entertainer” category, or could, if he were more entertaining and less like a stop-motion Charles Lane who’s been put in the dryer and shrunk.

And the letters in YWASC for the most part rhyme! What the hell, Rankin/Bass? Blue Christmas isn’t prose at all.

So what is the main connecting issue?

We finally decided the main issue is that the two of us are idiots.