I add nothing to the current human conversation when I note that much of 2016 was thoroughly rotten, unsettling, cruel, and relentless. I’ve even started a list for myself to keep my memory of it in some sort of balance – the Cubs won; I got a surprise last minute first row chance to see Springsteen again; some of my favorite people on the planet had a healthy baby; our young nieces are memorizing Hamilton and leaping headfirst into DC comics and Agatha Christie; our teen nephews are aging rapidly, settling nicely into their personal freak flags, and asking all the right questions about Dr. Strangelove; my wife and I have played Olivia/Malvolio, Speed/Launce, and started in on a new set of song for our music duo; the Tavern re-opened after an overlong arson-based hiatus.

I save two things for last. I’m not very good at Stillness, and if my body is, my mind ain’t. One or both are always moving. So the time my body forced me to spend recuperating after the glorious surgery in mid-March, after which the innards were dandy but the muscles that usually protect said innards had to spend a lot of time engirded and, yes, still, was necessary but ohgoodgoddifficult. And while I’m anything but a bodybuilder, I was almost constantly weak and quivery in an unpleasant way I hid from most people.

But in August, after an international trip and a three-month outdoor performance gig (which you’d think would be enough proof of recovery, tough though it was), the gem of my summer was reaching The Rock out in the lake when we visited my in-laws.* It’s the thing one swims to when one goes to that lake. Because it’s there. Just far enough out to be worth going to, but not really tiring. Nice quiet place to sit (barring interference from the inevitable speedboating jackass, but they’ve been around since well before 2016). I wasn’t sure if I’d be making it to The Rock this year.

I made it to The Rock.

For the second thing, I direct your attention back to that international trip I mentioned both above and here. The Stratford Trip. Just in time for the quadricentennial of Shakespeare’s death (probably, -ish) and his 452nd birthday (-ish, probably), Kentucky Shakespeare took a tiny contingent over to be part of the festivities. And as things that I’ll try to remember about this year when posterity marks it as the time many great people and nations died, this trip will rank highest.

For starters, I got to be Shakespeare Himself (sort of, –ish) bright and sweetsweetMoses early on the BBC’s kickoff to the 23 April festivities as there in slightly muddy and as-yet-unopened New Place (though they did let Prince Charles in later that afternoon, so now I suppose anyone can enter) four of us did a variation on the house blessing scene from A Midsummer Night’s Dream live on national(ized) television. That was terrifying after the fact.

Then we had an opportunity to perform some scenes in the courtyard of the birthplace proper, which while not widely recognized as a performance space has a fascinating vibe when used as one. It was touch and go for a moment there when my wife-as-Kate faux-kneed me-as-Petruchio-with-a-“ch”-thank-you in the groin (as planned) and I dropped to my knees, which takes a bit more abdominal strength than I was ready for, but the day was saved by the power of the muscle-tightening and quite slimming girdle under my doublet. We acquitted ourselves well enough, I guess, that two locals said afterwards, “They were quite good! Despite the accents!” to our (also American) friend and artistic director, who smiled and nodded so as not to betray his own accent to them.

Also, I touched a Folio. There’s a First Folio floating through town right now, at Louisville’s Frazier History Museum. We went to see it (and some Shaker furniture and a Prohibition exhibit and the dresses from the “Sisters” number in White Christmas – there’s a lot going on there) with my folks last week and it was fun to see their reactions…but I had touched one.

You see, down in the vaults beneath the Shakespeare Birthplace Trust (and its research facility, at which I got to browse through Bram Stoker’s old Irving/Terry playbills and the prompt books from the RSC’s Barton-era Wars of the Roses which made my fingertips tingle a bit with impertinence), we were shown some fancy and ancient tomes, your Holinsheds and your Plutarchs and your medical treatises of the era and whatnot, and I poked an aforementioned emboldened fingertip at a spine and said, “And what’s this one?”

Now had this been one of my average days, my recoil, which was significant and covered no little ground, would have sent me backwards into a seven-foot plinth atop which was a bust of antiquity which would fall into my arms after I danced about trying to keep it from becoming a bust, full-stop. But the spirit of Buster Keaton kept his distance and all that fell through the air was a high-pitched “Eep!” from me. But the covers of Folios are well known for being not-particularly-valuable, relatively, and no one seemed terribly upset by it, myself excluded. We had scrimped for the part of the trip we were responsible for, but an irreplaceable volume wasn’t in the budget. 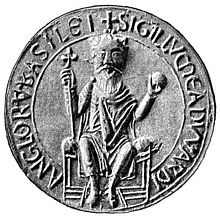 (A quick note: I always grouse about quotes out of context, especially when I’m the guilty party. So I’ll note that this post’s headline is (clearly) not about Shakespeare as I imply but about the healing (?) hands of King Edward the Confessor, as spoken by Malcolm in that English Doctor mini-scene everyone cuts, and I didn’t have scrofula anyway, but an intestinal complaint. I also can’t help but note sadly here that we’re not very likely to get aid from England these days in dealing with our own impending tyrant, who is practically on his way to Scone, whatever you choose to rhyme it with, as we sit, what with England having its own non-scrofular troubles at the moment.)

*My in-laws don’t live in the lake. Just near.

2 thoughts on “The mere despair of surgery, he cures – MACBETH, IV iii”