Another show, another mix. I’ve gone for kind of a Wes Anderson soundtrack feel here, seeing as the nature of Richard’s character is fairly Euro-emo (Yérmo? That does get the Yé-Yé in there). I mean, look at that face… 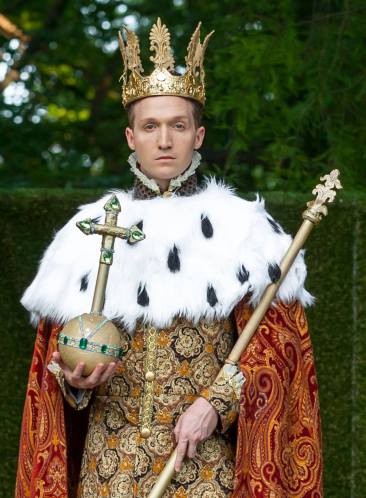 He was born in Bordeaux and all (Richard, I mean), so some French pop will be welcome. A little more introspection than is particularly healthy, so some Kinks (more than one song by the same artist, which normally goes against my personal mix rules, but again, it plays into the Andersonity, so I make an exception here). And other things.

The reasons behind the inclusion of each song float from lyric to title to general mood, depending, though some are admittedly more obvious than others…

King’s Revenge – Thin Lizzy: I think the lyrics explain themselves, and perhaps the attitude of the multitude, what Bagot calls the “wavering Commons”.

I’m On an Island – The Kinks: The nature imagery throughout this play is notable, not just for Gaunt’s famous “sceptered isle” speech. I like to think this is Richard separated from the Queen.

Old Old Woodstock – Van Morrison: The domino that starts it all tumbling down the stairs is Woodstock. (Why does he fly upside down?)

What’s the Buzz – Roy Meriwether Trio: Something about Bushie, Bagot, & Greene always makes me think of this, but also there’s a LOT of throwing around of Judas’s name every time anyone so much as puts too much mustard on Richard’s sandwich. Listening to this version also reminds me how much Sir Andrew stole from Donovan, but that’s not important here.

Long Daddy Green – Blossom Dearie: Not so much because I’m playing Greene as to acknowledge the importance of what Harvey Korman would call Count De Monet in this particular tale.

Friendly Loans – The Marcels: “Why cousin, wert though Regent of the world,/ It were a shame to let this land by lease.”

Green Green Grass of Home – Tom Jones: Not only another paean to the land itself, but featuring a Welshman in honor of the superstitious captain who leaves at greatly exaggerated rumors of Richard’s demise.

Surrey with the Fringe on Top – Sonny Rollins: This is useless, but I think of it whenever Surrey’s name is mentioned, so…

Help! – Cathy Berberian: These lyrics remind me of Richard a couple of times in the play, but particularly during his “sit upon the ground” breakdown.

Stop Your Sobbing – The Kinks: …and these remind me of everyone around Richard in said scene.

In the Garden – Hee Haw Gospel Quartet: Have a seat. Have an apricock. I have some bad news.

Je Crois En Toi – How to Succeed in Business Without Really Trying (Original 1961 French Cast): If you know How to Succeed, you know this scene is a bunch of guys in an executive washroom yelling about their competition (“I’ve gotta stop that man cold or he’ll stop me”), followed by Our Hero’s personal pep talk into a mirror. This French version fit the vibe better.

Fractured Mirror – Ace Frehley: “For there it is, crack’d in a hundred shivers.”

It’s a Sunshine Day – The Brady Bunch: “’God save King Henry’, unking’d Richard says,/ ‘And send him many years of sunshine days.” And then from the side stage I sing this under my breath.

Yesterday – Roosevelt Grier: This and the next few songs are all definite Richard-at-Pomfret underscoring, top to bottom. And yes, that’s Rosie Grier.

Too Much on My Mind – The Kinks: “For no thought is contented.” I mean, right?

The Party’s Over – Judy Holliday: Melodramatic showtunes seem like they’d be Richard thing if he had been born a few centuries later.

Magic Garden – Dusty Springfield: Were there a closing credits sequence, this would doubtless play over it. But it’s a play, so there isn’t. But still. Jimmy Webb clearly read Richard II.

This is a text widget, which allows you to add text or HTML to your sidebar. You can use them to display text, links, images, HTML, or a combination of these. Edit them in the Widget section of the Customizer.
Loading Comments...
%d bloggers like this: