A fancy note for the audiences who will be coming to Kentucky Shakespeare’s Richard II:

For all of the political goings-on in Shakespeare’s Histories, the thing to bear in mind while you’re needlessly stressing yourself out about who’s going by which title in this scene (and it is needless; don’t stress out) is that they’re really all family affairs, tales of fathers and sons and cousins and brothers (yes, predominantly men, though the women, sparse as their stage time may be, always seem to be the people most concerned about the cohesion of the family unit) doing rotten stuff to each other in the name of something that falls between Honor and Ambition, with sprinkles of Vengeance thrown in.

Richard II, for example, could easily be described as the story of a couple of brothers who have just lost another brother, probably killed at the command of their nephew, who just happens to be king. Or the story of two cousins, both with powerful fathers who never quite got to be in charge, metaphorically arm-wrestling over which of them gets to be in charge. Almost all the major players are closely related by blood or marriage. Here’s a simple Wikipedia family tree, drawn by Muriel Gottrop (all that Creative Commons stuff applies here).

And this one doesn’t even include all the many, many sons of Edward III. They were coming out his ears. Good standard policy for a king: one or two sons? Great. But it reaches a point where too many sons become a problem and people start waking up dead in the morning. But, as is noted by James Goldman’s Eleanor of Aquitaine in The Lion in Winter, “what family doesn’t have its ups and downs?”

All of these sons of Edward III got up to all sorts of nonsense that Shakespeare mercifully leaves out and/or condenses (the less said about John of Gaunt’s attempts to claim a Spanish throne, the better), but the thrust of this particular play isn’t even the internecine family shenanigans so much as the question of who (if anyone) gets to decide whether the Heaven-Anointed King is rotten at his job, and if so, what can be done about it.

Now, Shakespeare’s audience would have probably known a fair amount about the main players in this story, in part because it was their nation’s history, in part because royals & rulers have been afforded celebrity status for centuries – The Queen Herself bets in the middle of this play that a pair of commoners she encounters will “talk of State: for everyone doth so/ Against a change” (the change in this case not being a good one for her…) – and in part because they didn’t live in our age of Television Renaissance and absent a new episode of Nashville waiting for them when they got home, they had to have something in their heads. So they had a basic familiarity with these powerful families in a way that we might, in a poorly combined analogy, have of the Kennedys and the Skywalkers.

A version of all the “Previously on…” information needed to make sense of Richard II  would have been easy to acquire to folks in Elizabethan London since there was a popular not-by-Shakespeare play, often called Woodstock, that covered the events leading up to Shakespeare’s – namely, the sketchy death of Thomas Woodstock, Duke of Gloucester, Richard’s uncle. It’s assumed that its popularity was one of the reasons Shakespeare even wrote his “sequel” to it. But we’re not doing that play (I’ve read it; it’s pretty lumpy). So this production will open with a prologue written/assembled for the occasion that will, one hopes,put forward all you need to know leading up to Act I Scene I.

Seeing a good production is, as is true of any play, always clearer than reading it, if for no other reason than you have faces and voices to put with the names. And lord knows the British aristocracy depicted in Shakespeare collected names/titles like characters in Russian novels. So this prologue is also a nice chance to say (though not so baldly), “See that guy? He’s the Duke of York. See her? Her husband just died and almost nobody’s happy about it.”

Here’s something else that might be handy: a map of England at around (just after) Richard’s time. 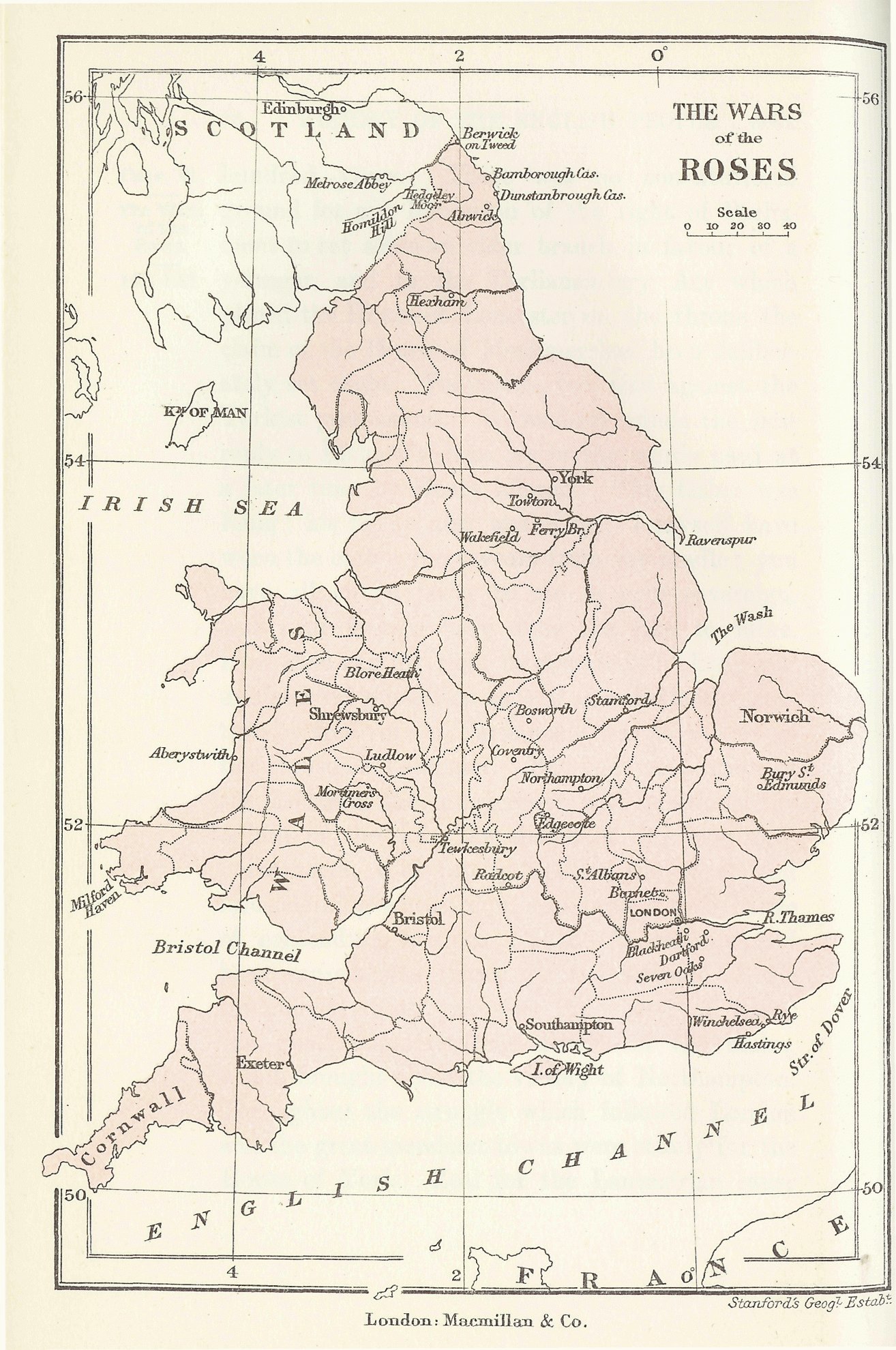 So if you’re wondering where he lands when we come back from intermission (and he comes back from Ireland), it’s just west of the E in WALES. Or where Bullingbrooke lands when he comes back from exile? Ravenspur is on the northeast coast, north of The Wash. Bristol isn’t terribly hard to find on here, and I’ll trust you to spot London on your own. There isn’t a terrible amount of fighting in the play (which is one of the big problems some of the other nobles have with Richard’s reign, really – the missed opportunity to gain money and land through fighting. Though being less war-prone would be seen as a strength to modern eyes. Except he manages to send soldiers off to Ireland, so, his hands aren’t that clean). So feel free to ignore the battlefields until next year when Henry IV née Bullingbrooke does a fair amount of sparring with…well, I won’t tell you until 2018.