This one isn’t even my fault, I swear.

Information you need for this: The Wife and I are playing Beatrice and Benedicke in June; we played Kate and Petruchio together two years ago.

Now, as I’m sure is true of any pair of people who have played those roles, as we prepare there’s great interest on our part in playing up the differences as much as possible. It would be very easy to make each pair more or less fit under the same easy umbrella of Battling-But-Inevitable Lovers and leave it at that. But they’re far more different than they would seem at a casual glance, and one is more than a rough draft of the other, as the oversimplification often goes.

Kate and Petruchio are individually damaged people whose jagged edges, by an accident of fate, fit together like pieces of a jigsaw puzzle. They have little place in society and don’t seem to be interested in having one at all. Their public behavior is awful and no one really likes them. (Petruchio sort of has a friend in Hortensio, but only so much as they are useful to each other.)

Beatrice and Benedicke, however, are generally well-liked – their “merry war” is only with each other. The rest don’t see themselves as victims of their crimes of snark. The Messina gang seems  entertained.

“So they’re Don Rickles,” said The Wife earlier. “Everyone is thrilled to be insulted by them.”

Rickles has been a topic of conversation around our house since his recent passing (I’m surprised I haven’t made her (re-)watch one of my beloved beach movies this week; they are for reasons Rickles and unRickles vital anthropological documents and I will never forsake them), so it’s no surprise that he came up. But I hadn’t thought of B&B in that way until she said something. We had noticed the theme in all the eulogizing by people both mentored and roasted by Rickles: everyone clearly loved and respected him in a deep and sincere way. At least the community he was a big part of certainly did.

And I think she hit on an important way to highlight the differences between the respective Mature Couples in Shrew and Ado: how they are received. B&B are constantly described as “merry” and no one says particularly unkind things about them on any subject except their mutual disdain for each other. Beatrice and her unstoppable Inner Groucho (a problem we share) don’t care what’s being talked about – wiseassery will be on offer. Benedicke’s modus operandi is Scorcesier…

(though that’s not the Scorcese I mean) …and was outlined by the oaf who wrote that “women can’t possibly understand Goodfellas” article a couple of years ago, to his eternal chagrin, I hope. His take on the movie was that of a person whose opinions are of little value, but he does manage to make one accurate diagnosis: busting each other’s chops is a particular feature of male relationships, in the English-speaking world, anyway. The military dudebros visiting Messina give each other hell constantly but don’t seem to mind and in fact egg each other on, until everything goes south when Don John ruins everything (though if the whole of the society we see wasn’t already solidly built from big dry chunks of misogyny he would have to do more than huff/puff to knock it all down; another post).

It will be on us to remember, therefore, while wiping K&P from our memory, that B&B like to crack wise but don’t really habitually belittle anyone but each other and even that is based in a mutual history, not disagreeableness. No one takes them terribly seriously or fears their wrath; they instead enjoy and encourage their wit. The heavy consequences in this play come from other quarters; these two just happen get wrapped up in them.

So that’s our plan. In the midst of a Regency-set Much Ado, we’re going to play Beatrice and Benedicke as Phyllis Diller and Don Rickles, wardrobe and all.* See you there. 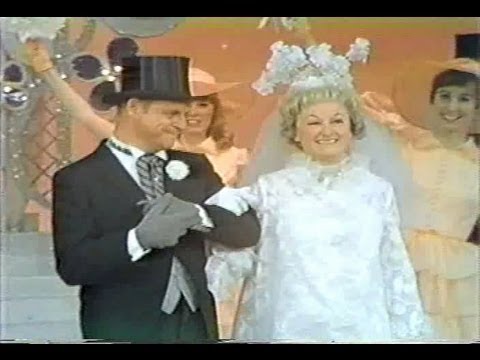 * yes, you’re right, she would  have been a great Mistress Quickly, especially with that whole “Master Fang” business in 2 Henry IV.

One thought on “& as I am an honest Puck – A MIDSUMMER NIGHT’S DREAM, V i”

This is a text widget, which allows you to add text or HTML to your sidebar. You can use them to display text, links, images, HTML, or a combination of these. Edit them in the Widget section of the Customizer.
Loading Comments...
%d bloggers like this: