This was all going to be a little bit silly, but it’s taken a turn. But let’s begin at the beginning. 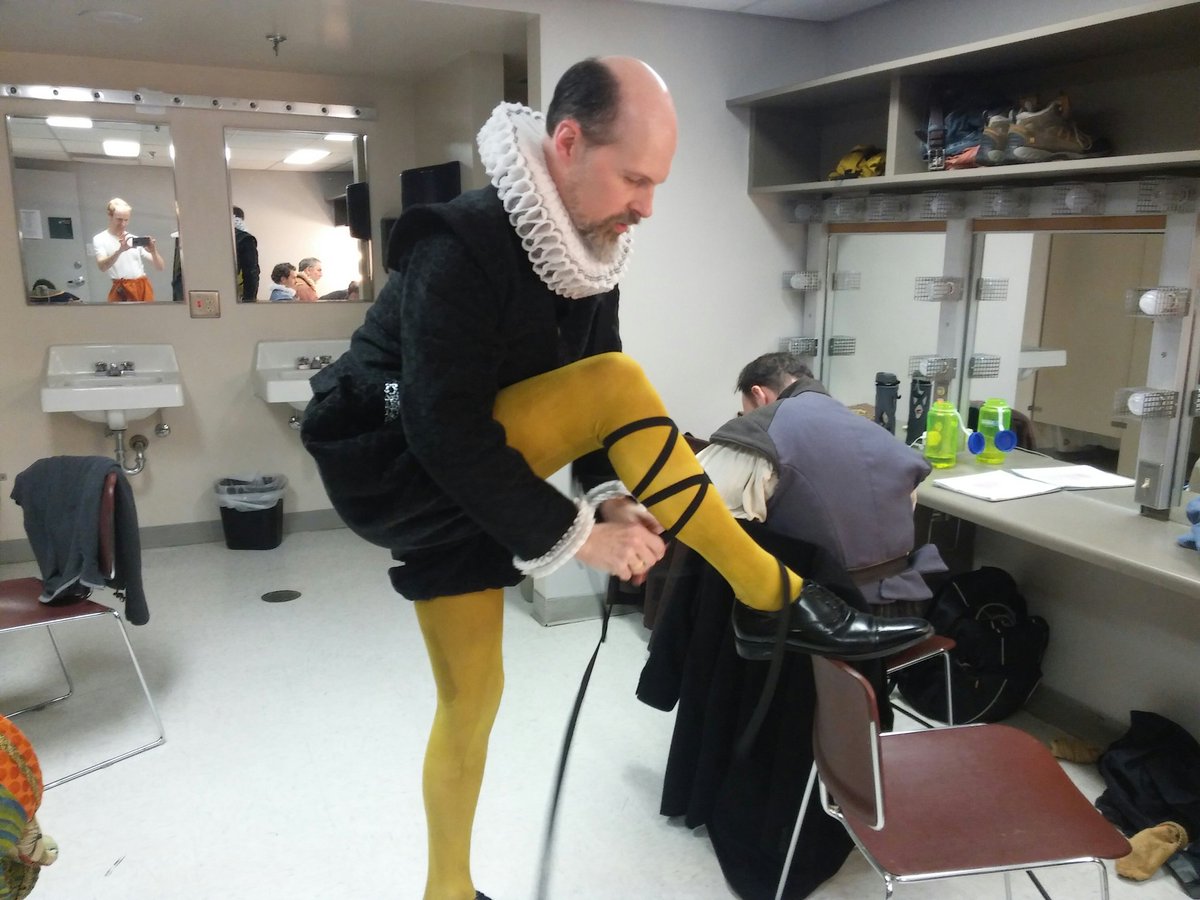 A friend was in town a week or so ago for the Humana Festival at Actors Theatre of Louisville and conversation turned to Twelfth Night, a production of which he’s going to be involved in soon. My wife and I hadn’t seen him since the production we were in at the beginning of last year (which inspired the name of this ludicrous little blog), so there was much chatter, eventually turning to the whole “how dark does one play the ending, what with Malvolio being confined and confounded in a little room, do you reckon?” question, about which I have, as is my tendency, Opinions. They were gut opinions, but finally something occurred to me that I think backs them up.

I should first disclose that I am and have, at least since my university years, been sick of the Darkening of the Comedies.. This notion that the Tragedies are the real deal, the Histories are just Tragedies based on true stories (from which most comedy must be tainted/excised) and the Comedies, well, if they are anything but cheap crowd-pleasers, the Christmas Carols* of Shakespeare companies, at least we can overstate their existing darkness whenever possible, and maybe superimpose some extra for good measure, particularly at the very end when we have a chance to leave the audience with a sour stomach for one reason or another. It’ll let people know we’re Serious About All This.

And this was always treated as a profound thought from the Tragedians, worthy of congratulations or at least knowing nods above steepled fingers. “There’s such darkness in the Comedies, you know?” I was, as a lifelong lover of Chaplin’s movies about a starving homeless guy, the Marx Brothers’ insistent, destructive anarchy, the parentless Freudian head cases of Charles M. Schultz, confused. I thought that was the whole deal with comedy, that it Went On Despite, yes? So the battle between “Yes! I too have suffered!” and “Get over yourself; we’ve all suffered!”, between celebrating and mocking our mutual pain, is difficult to take part in when surrounded like the Light (Comedy) Brigade by people who sniff at your “glibness” if you aren’t constantly plunging yourself into the Cimmerian darkness of intangible despair. (That line is for my wife, who will appreciate it.)

We were talking about the end of Twelfth Night and how I fully believe that we aren’t supposed to mind Malvolio’s detention all that much because he is a petty, vindictive martinet with no trace of self-awareness. And I loved playing the guy. That old saw about having to like the character you’re playing in order to get under the skin is the true true; more accurately, you have to acknowledge that in some way you are the character in that in some way you are everybody, so there you are. We are all petty, vindictive martinets with little self-awareness at some time. I’ve been in traffic. And I’m not blind to the paragraphs above that are still unmercifully surly about mere aesthetic differences with people I’ve scarcely seen for twenty years. We’re all a bit Malvolic.

We most of us only suffer it in spells, though, and when Twelfth Night ends we leave Malvolio in the midst of being unmerciful, unforgiving, a crime that Shakespeare never lets slide:

Prospero? Stranded on an island for fifteen years by his brother. What does he do at the play’s end? Forgives him.

Who talks him into it? Ariel…who was enslaved by Prospero (and Sycorax and who knows who else before that). Ariel’s response, by all appearances, when released by Prospero? Forgives him.

Titus Andronicus? Nobody forgives nobody never. And everybody dies HORRIBLY, except the ones left behind to enact more revenge. We just run out of time to watch it all.

Duke Frederick of As You Like It? Random spiritual awakening, and he apologizes for everything – he only sends a note (“My bad; you can have all your stuff back”**), but he does it. No one says, “Not enough! Let’s storm the monastery and stab him!”

Hamlet? So bent on being vengeful that he opts out of killing Claudius in a private room where there’s only the two of them because that just might not condemn his soul to eternal hellfire. And what fun is that? So fifty-three other people have to die and a short-tempered cannon-feeding military dictator comes in to run the show thereafter. Good call.

There are others – Portia does a whole speech about this to Shylock you may have heard of – but that’s plenty.

And Malvolio decides to leave on the note of being “revenged on the whole pack of you”. So he gets what he gets. Which is probably, knowing Olivia, a generous severance package which he’ll still try to sue over because of some bonus he feels he’s owed over and above…somehow the lawyer he hires turns out to be a disguised Feste…it still ends badly. Because he’s a petty, vindictive martinet with no trace of self-awareness.

A detail that kind of slides by people: the whole reason Malvolio is released in Act V is to tell them what happened to the kind sea captain who still has Viola’s clothes; the helpful guy we haven’t seen since the first scene. Seems one of the reasons we haven’t seen him, thrown in as our last reminder of Malvolio’s consistent behavior, is that he was locked up (?!) by Malvolio for some reason no one is even sure of. But yes, let’s get all worried about Mal’s “pain & suffering”.

At any rate, Malvolio and the Maria/Toby/Feste/Fabian contingent are people we’d all rather watch bounce off each other than be around (have I mentioned that this is my favorite of Shakespeare’s plays?), but I can’t pretend any of them are serious offenders even of each other. They’re just childish people, in a turn-of-the-seventeenth-century-Seinfeld sort of way.

Now, how to put these feelings into performance? It isn’t terribly hard to make Malvolio an unrelenting pain in the ass simply by using the text. But some think the last bit of cruel wrongful incarceration on the part of Maria et al. is over the line. (I guess those folks don’t like sea captains.) I figured the best way to keep this in the realm of comedy (bending, not breaking) was to make it about injured pride, not utter madness, so the solution (at which I didn’t arrive until tech, which made me scare the hell out of the stage manager, to whom I apologized profusely) was to exit haughtily after the declaration of vengeance…and step right off the stage, entirely missing the steps into the vom, like an idiot. A couple of characters would snort, I would glare, straighten the skirts of my doublet and re-haughtify myself to exit again. It seemed to work, this gesture stolen directly from Rex Harrison, I later realized.

I decided to write all that this morning and had to do other things, but this topic keeps pitbulling the world today and just won’t unlock its jaws.

First we got word from a friend who was some time ago involved in a real, non-fictional tragedy. This friend was rattled after merely using the word “forgiveness” in discussing ways people have dealt with such tragedies in the past resulted in a verbal attack; apparently that vicious suggestion of “forgiveness” disrespects the grief of others…which, knowing this friend (and I’d have the same reaction) will be the cause of a roiling stomach precisely because of the evident pain of the person who decided to lash out at the suggestion of maintaining humanity in the face of tragedy, as if that suggestion was a mere passive/aggressive implication that said lasher-out hadn’t been forgiving enough. But I’m trying to universalize and instead I’m vaguebooking. Sorry.

Also, the verdict on the Charleston white-supremacy terrorist murders came down just a little while ago, which I am neither eloquent nor wise enough to try to summarize the facts of here, much less my own feelings, but there’s a conversation going on within many feeds and timelines and households and newsrooms right now about justice and forgiveness and how those things work.

And that conversation always brings me around to Ariel again, Ariel who (which?) is both non-human and fictional and who suggests that if Prospero were even to look upon the confusion he’s caused his enemies, “your affections/ Would become tender.” Prospero responds, “Dost thou thinke so, Spirit?”

And Ariel says (bearing in mind our distance from Jacobean spelling), “Mine would, Sir, were I humane.”

Usually this is modernized to “human” but it could still be “humane”. And ideally they’d be synonyms anyway.

All this makes Prospero realize that, as stated in this post’s title, “the rarer Action is/ In vertue, than in vengeance,” and it’s worth saying here that “rarer” in that era could be taken to mean not just uncommon, but also good, uncommonly good. Which is even better than humane***.

It’s been a long day; it’s been a long post. I am not a fan of his work, so my earlier plan was to quote Don Henley with ironic sarcasm and note that in trying to get down to the heart of the matter, I’ve reached the conclusion that I think it’s about forgiveness. Forgiveness.

But the world has blown my stock of irony today and I’d have to admit that the quotation works better without it and I’d just feel like a jerk. Not a Malvolio-level jerk, but still.

* I freaking love A Christmas Carol, for the record; it’s about generosity of spirit, which will be relevant shortly, if it can ever be said that it’s not relevant.

*** tonally this is a weird place to note that today, 10 April 2017, is the incept date of replicant Leon Kowalski in Blade Runner. There’s an Ariel/Caliban streak in the replicants, but that’s probably obvious enough not to require a whole post. #MoreHumaneThanHumane