Yes, yes, last night was the first audience for Actors Theatre of Louisville’s Macbeth, but next week Kentucky Shakespeare’s Titus Andronicus will also open, for which I did the dramaturgical leg work, which is to say providing text coaching for the cast and butchering the script down to a honey-baked ninety minutes. I’ve asked myself fairly often in the last couple of months whether referring to my cutting work on this particular play as “butchering” or any of the other gruesome jokes the story inspires will ever cease to amuse me and the answer thus far seems to be a resounding “No; no, it won’t.”

I teeter between being a let’s-do-the-whole-thing-uncut-at-proper-speed-in-tights-won’t-it-be-glorious purist and an if-Orson-could-put-it-in-a-blender-so-can-I scissorhanded madman. My goal, in latter mode – and I’ve always been given either a required maximum running time or a significantly reduced cast size in these cases – has always been not to break the poor thing’s spine, but to adapt to the circumstances.

For example, when I was hired for Titus, I was told a) ninety minutes and b) modern mafia/Tarantino setting. (It will be performed in a storage warehouse – floor drains! – behind a gay bar in an area of Louisville known as Butchertown*. Writes itself.) So knowing that the space will be that intimate, when I cut for time I can take liberties with some lines like Marcus’s

Doth rise and fall between thy rosèd lips,

Coming and going with thy honey breath.

That’s lovely, but if something has to go, let it be something describing a visual to the cheap seats, seeing as we’ve eliminated the cheap seats and put everyone up close. They will notice the blood pouring from her mouth and Marcus still has plenty to say about it. In a perfect world I’m able to leave a stage direction to replace what’s been excised. If the beautiful pentameter provides useful info for the way the actor is being told by the text to respond ( “Gee fellas, I’m almost crying” is restated about eighty ways in the Folio) I’m careful about leaving that information in the right place even if the seven lines telling her to almost-cry are gone.

Beyond that, there’s the setting. Titus in this case is not just being played in a 21st century warehouse behind a club; it’s more or less set in one. So instead of shooting mean-spirited message-laden arrows around to make Titus’s feelings about Saturninus known, the same story point is made by visual means. (I won’t say how just yet – you’ll have to see the show if you’re in town.) And in some cases, the Tarantinocity is sold with soundtrack choices that do the job some of the language did before. And lots of blood. Did I mention blood?

The following is both preciously obnoxious and utterly unexaggerated. I have occasional conversations with Will about my choices. I try not to have them aloud for my wife’s sake, but I have them. The Will in my head is not a dainty poet. He’s a playwright whose shameless prime interest is in people liking his show. And if I have to explain to him changes in stagecraft over the last four centuries, so be it.

Me: They can’t just pee against the wall anymore, you know; they have to line up.

Will: Then by all means let’s put a bladder break in here for the sake of their attention.

Me: Great. Now, we’ve reminded them of this bit of info four times now. The people are all facing the stage, there’s a spotlight on the actor, they’ve paid $20 a pop and almost no one in the balcony is soliciting a prostitute. How about we cut two of the reminders?

He almost always understands. Then I have to explain electricity and economics, and it’s this whole thing, and I have to make him go away until I need him again.

(For the record, he looks exactly like Sam Crubish from the Bugs Bunny cartoon “A Witch’s Tangled Hare” (1959) co-starring Witch Hazel, but with darker hair. This, too, is utterly unexaggerated.) 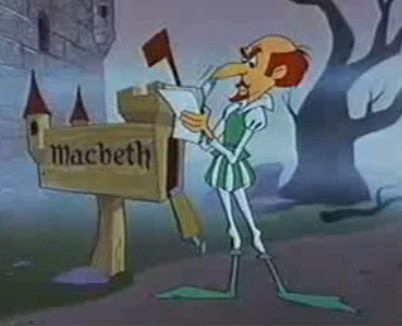 I don’t feel nearly as bad about judicious prunings like this in a script like Titus, which like a few others is primarily a Plot Being Told and not, like say Winter’s Tale, a kind of opera, in that the story can be quickly summarized and much of the point of the evening is vamping about what’s going on in the characters’ emotional innards. Not that the innards aren’t important in Titus. (NEVER GOING TO STOP AMUSING ME.)

That’s your unasked-for glimpse into what I’m thinking when I go about these little enterprises Irving called, as I believe I said on here somewhere before, “arrangements”. Of course, Irving had his Macbeth wig arranged so it would “unfix” as the text demanded (if that’s really the word), and I’m just some over-read Midwestern actor with a blog, so. Grain of salt.

*and if anyone from Play, the bar in question, is reading this and is interested in an idea I have for a hilarious gender-bent Moliere adaptation to be done on your really splendid and enticing drag stage/runway, contact me. It would be brilliant.