There’s a time in Shakespeare (any?) rehearsal where Job #1 is figuring out What on earth it is exactly that you’re even saying. Then usually comes the Why. Then, ideally, choosing a How that aids audience understanding of the What/Why. Anything that comes after is gravy or fight choreography. More fun.

Mingled in the What/Why/How somewhere is the poetic stuff, which should ideally be scarcely noticed by the audience but which should be tremendously helpful to the actor. I’m not going to get all jargony, but I’ll use one of the less famous and vital lines in Macbeth (II iv):

Threescore and ten I can remember well; within the volume of which time I have seen hours dreadful and things strange; but this sore night hath trifled former knowings.

That’s the pure sentence version, which isn’t too tough to figure out  – “I’m old and I’ve seen a lot of crazy shit in my day, but tonight made all that look pale.” Done. Old Man’s thought expressed; Ross’s turn to speak; Macbeth and the rest have some time to change out of their nightgowns, Macduff has time to pack a train case for Fife.

Now, some actors insist that’s plenty. Basic punctuation and word definition is all they need from a script. (I suppose there are also some singers and conductors that figure all those extra marks Mozart cluttered his page with that weren’t actual notes can be ignored, but I’m not an opera expert.)

If we were to write it out as it appears in verse it looks more like this:

Threescore and ten I can remember well;

Within the volume of which time I have seen

Hours dreadful and things strange; but this sore night

And that’s different. Beside the old “da DUM da DUM da DUM da DUM da DUM” (with variations) business that helps with the intended rhythm (WithIN the VOLume OF which TIME I have SEEN), there are those lovely, pesky mid-phrase turnarounds at the ends of the lines (seen/Hours, night/Hath). Some people feel like pausing to let those be heard makes for a distancing Ye Olde-ness, yet those same people often put in “naturalistic” pauses willy-nilly just as they do in a standard contemporary play.

I’m of the firm opinion that as the years went by and he got ideas about this whole verse deal Shakespeare was trying to have and eat the cake – stylized lines that also sounded like a person was thinking them up as she went.

So to over-explicate the previous:

Threescore and ten I can remember well; (chew on THAT for a minute, youngster)

Within the volume of which time I have seen  (I’ve seen a lot – how shall I narrow this down?)

Hours dreadful and things strange; but this sore night (I’m going to have to make up a word used nowhere else in these plays to express this)

Then Ross pipes in with his usual Debbie Downer action. How is it that people don’t just break into a run when they see him coming? Even on the rare occasion when he brings good news (I ii), he makes you dangle for it:

Where the Norweyan banners flout the sky

Norway himself, with terrible numbers,

The Thane of Cawdor, began a dismal conflict,   (Yes,  yes, hence the report,. Did we win?)

Till that Bellona’s bridegroom, lapped in proof,

The victory fell on us –

I should note that pausing isn’t what I’m talking about – these plays are plenty long enough as it is to the 21st century bladder– but light thought-hiccuping just as you do, just as anyone does when speaking aloud while figuring out what word comes next.

This is why actors get all fancy about doing Shakespeare. We’re putting in extra brain work that taxes the sort of person who goes into this business a bit more than the usual emotional/physical gooiness that is our stock-in-trade. Be gentle with us. Our brains, like those of Dr. Gumby’s patients, hurt. 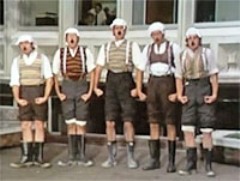 One thought on “Nay then, God buy you, an you talk in blank verse.–AS YOU LIKE IT, IV i”