All right. Back to this stuff. 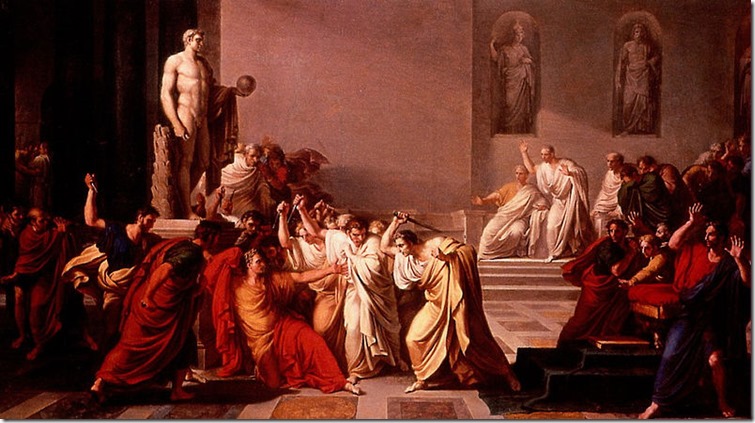 I’m working on a pronunciation guide/glossary for our production of Julius Caesar and remembering the last time I saw a really effective production. I visited London in 1999 and paid my groundling pound to see it at the Globe. I went in with the same feeling many Americans who went to public school have about it, which is to say I was forced to read it by someone who I can only assume desperately wanted me to hate it because wow was it dull and forbidding.

I’ve since been told that one of the reasons Julius Caesar has been such an academic mainstay for so many years in our Puritan-founded nation (remember them? The ones who closed theatres in the first place?) is that unlike Macbeth, Romeo & Juliet, and just about all of the other biggies, there is zero hanky panky; none of filthy flirting and cheap puns about genitalia that admittedly don’t play as well now as they must have done once but would certainly garner a 14-year-old’s attention more than the two possible allusions to sex in JC: the title character’s cheap dig at his wife’s infertility and Portia’s use of the word “harlot” (though she also says the word “sex”, always a distraction to The Youth even when it means gender as it does in her case). That’s it. No booze-flaccid Porter, no Folger footnote about what “nothing” could occasionally mean. No fun.

But it was what was playing and I wasn’t going to miss seeing a show at this space I couldn’t just walk down the road to every day.* So I saw this traditional (Elizabethan, all-male company, pumpkin-pants-and-toga-pieces) Julius Caesar, set on a bare stage with a bench and a potted fern, with the only modern dress given to the Plebians at the top and around the middle (of the play, not of their wardrobes). And it was fast and it was exciting and there was comedy and there was storytelling and there was an intermission about every thirty minutes and I ate a bag of nuts and leaned my right elbow against downstage left for most of it and I loved it.

And not because of anything they did, but just because of the story, my mind kept banking the play off of the Kenneth Starr madness my own country was enmeshed in, the impeachment of a president not because of any particular policy or ability to govern but because there were people in said government who didn’t like him and who decided character assassination was the best way to distract from what was really happening, which was that they didn’t like not being in charge themselves. Which was causing rather a mess for the people on both sides of that equation who were just trying to live their lives in a country.

Which seemed, you know, Roman. Or Scottish. Or wherever any of about a dozen (minimum) works of Shakespeare take place when their conversations turns toward the unholy mess that follows whenever there’s a non-peaceful transfer of power, regardless of whether it’s a good idea or not.

So look out for a lot of productions of the Histories, of Caesar, Macbeth, Lear, etc., coming up very soon being described both positively and negatively as “political” as if just by telling those stories they had any choice.

*UTTER DIGRESSION: I’m fascinated by all the recent Emma Rice controversy, whether you put the emphasis on the first or the second syllable. People keep asking me my opinion of it as if I’ve ever had the opportunity to see one of her pieces. I live in Kentucky. I have not. In April I did see a little chunk of a rehearsal of this Midsummer that everyone’s so on about and I admit I noticed the amplification and lights and thought, “Oh. That seems to be missing the point of this house.” Not “How dare she swap genders and use modern dress and set pieces”, which surely people are used to by now – though I was in the gallery and the big tree balloon thingies were a definite sightline problem even for the short time I was there – but the insistence on amplifying the actors seemed like kind of a waste. If you can’t be groundbreaking and also acoustic in an acoustically astounding place, then you’re not trying as hard as you think you are. And if amplification is still “groundbreaking” I must have read my calendar wrong this morning. I also couldn’t help but notice that the gender parity that’s such a part of Rice’s mission seemed to involve giving two of the plum female roles to men (one a drag performer, one just male) and letting most of the Mechanicals (though not Bottom) be women, a lateral move at best. I understand that making the fairies sexually ambiguous is a fine choice as is making one of the young couples a pair of same sex (that word again) lovers, but that seems like a choice about story, not about casting parity. I don’t know many women who would trade playing Titania for playing Snug. END OF DIGRESSION.